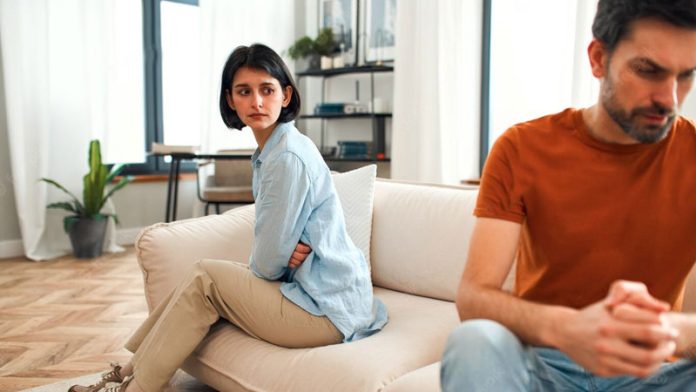 Being in love is a beautiful experience, and more so if the person you hold dear also loves you. But when you feel like you are the only one trying to keep your relationship, it is time to reconsider. Relationships are a complex thing, and they are never black and white to anyone. You have to figure out what suits you as a couple and what not. If your relationship doesn’t feel right, you have to look for clear signs he doesn’t love you. To be sure, find the gestures that say I don’t love you anymore, or I don’t want to be with you anymore. Then confront him about it.

When a guy is not into you, he withdraws himself are some clear cut signs he doesn’t love you or like you. You must look

out for the following clear signs he’s lost feelings for you if you feel out of love in a committed relationship.

1. Avoids To Hang Out One On One With You

The first most obvious thing men would do is to ignore you and avoid the sight of you. When a man loves you, he can never let other people come in between you guys. But if he doesn’t love you, he would avoid being alone with you or talk one on one.

You feel like he’s being awkward around you and doesn’t involve himself in deeper emotional conversations. Well, it may not always be a sign of emotional infidelity, but it is something you should look out for as an early sign.

3. Shows No Respect To You

A man utterly respects the woman in his life. But if he thinks of you any less than that, he will show some disrespect to you even if he is a gentleman. He will not respect your opinions and oppose you every time you suggest something.

Also Read: Showing no respect is a sign of a toxic relationship, which you should get out of as early as you can.

4. He Has Lost The Protective Instincts

If your man still loves you, he will be your shield whenever someone talks bad about you or lend you his help whenever you need it. If he doesn’t want to protect you, it means he is not committed to you. This is one of the sure signs he doesn’t love you anymore.

5. You Are Not His Priority Anymore

Some men are more attentive while some are not. But if you feel like he isn’t the same person he was when you started dating, it sure is a problem. If he doesn’t pay attention like he used to, you should consider getting out of this loveless relationship.

You are the only one thinking about how you should spend your weekend together or where you should go on vacation. It seems like he puts no effort into your relationship, and you are left to decide everything alone.

7. Isn’t Spending Time With You Any Longer

He now makes excuses that he’s caught up in work and can’t find time for you. He used to call you during his work hours, but now he’s not approachable. He stays out to avoid you because he’s not that into you anymore.

9. He’s Secretive About His Life

If a man is cheating on you or is escaping the relationship, he doesn’t open up to you anymore and will keep everything a secret. You share every moment of your day with him, but he hides away his activities. These are the signs he doesn’t love you.

10. He Stops Texting And Calling You

As he’s avoiding you, he will never be the first to call or text you. You always have to text and call him first to reach out to him. This sign speaks that he’s not that into you anymore.

11. He Doesn’t Get Jealous If You Talk About Other Guys

There is no such thing as a man who doesn’t get jealous. A little jealousy means he wants to protect you. But when your crush doesn’t get jealous even when you talk about other guys affectionately, it shows signs he never loved you.

Also Read: A little jealousy in a relationship shows that your man cares to be with you and will protect you.

When your existence bothers him, he not only becomes the man who doesn’t care about you but also blames you for every bad thing. He finds faults in you and gets angry at you. That is how he tries to escape the relationship.

13. Flirts With Other Women Infront of You

If your crush or boyfriend starts flirting with other women while you are around, it means he’s saying, I don’t love you anymore, and I don’t want to be with you anymore. Even if he appreciates other women more than you, It is also a red flag for you.

14. He Always Criticizes What You Do

When a man is scared of commitment, he will act weird and find faults in you at all costs. No one is perfect, but if he belittles you every time you are outside, and you feel constant criticism is taking over your love, then these are the signs he doesn’t love you anymore.

15. He’s Never There When You Need Him

He never feels the need to be with you or care about you. Now it’s all about him because he ignores you and is only there when he needs you. You want him to be with you at significant events, but you are only left waiting every time.

When a man is in love, he will be obvious about it. He will express that adoration at least a few times. But when he doesn’t say loving words at all, he publicly humiliates you by ignoring you, or you notice his changed body language, it shows signs he doesn’t love you.

Women’s intuition is more powerful than you think. When you feel that your man has started losing feelings for you or you now feel like you are just friends, it means something’s fishy. Either your man doesn’t want to be with you anymore, or he’s found someone else.

Factors That Lead To Signs He Doesn’t Love You!

Some factors play a huge role in deciding whether the relationships become strong or grow distant. You should judge your relationship on the following factors as well.

1. Is It A Long-Distance Relationship?

A long-distance relationship goes through much more trials and struggles than a live-in relationship. You face trouble connecting emotionally. That is why you cannot resonate with your time well enough to keep away from those misunderstandings.

2. Are You A Working Couple?

Working couples face more stress as they work all day long, can’t find time to go on vacations, or even communicate properly. If you are a working couple, sometimes you feel your priority is work and not your partner.

3. Have You Lost That Spark?

Ask yourself this question when your relationship feels boring to you. You both must put effort to revive the relationship. Otherwise, one of you may feel that the absence of loving gestures means I don’t love you anymore.

Men often are clueless about most emotions women feel. Needless to say, all the signs he doesn’t love you or he’s not that into you anymore won’t apply to every man because everyone is different. Some men communicate more; some express their love through actions; others say it. But most women try to measure their husband or boyfriend’s love in the same pattern. Keep in mind that not everything works for everyone. You need to read the atmosphere between both of you and judge your relationship personally and not on public opinions.

Also Read: If you figure out how to resolve and deal with those disappointments, you are halfway there on the 5 stepping stones in a relationship.