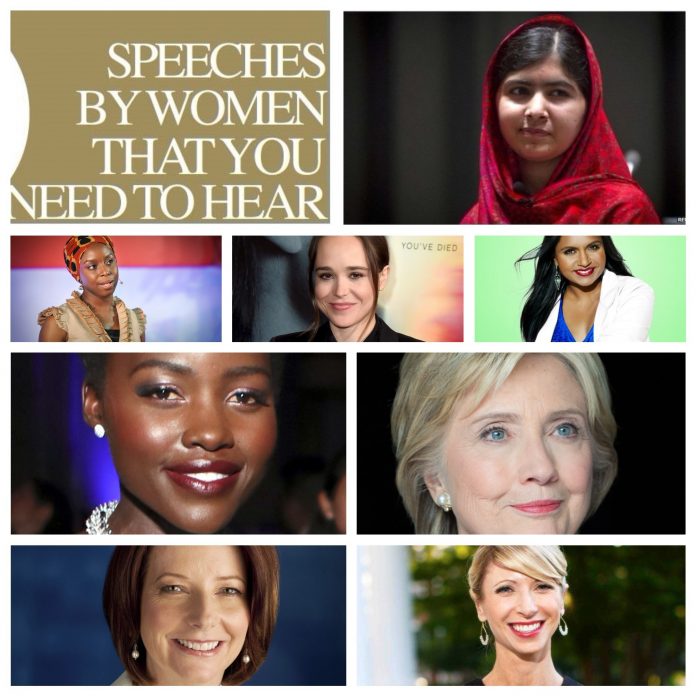 When a woman wants her voice to get heard then she needs to speak out loud, it’s like swimming in the opposite direction. As per Virginia Woolf, women need to establish a room on their own. In the early ages, women needed inspiration just to be seen, not heard. However, when they started to give all those inspiring speeches, it became apparent that they can rock the world. Let’s read and see together some of the best inspirational speeches by women the world had listened and seen.

Must Listen Inspirational Speeches by Women around the Globe

Malala Yousafzai is an Education Activist. At the age of 11, she started writing her blog for BBC, by portraying her life under the Taliban Regime. At the age of 15 Taliban shot her in the head, on her way to school. Nevertheless, she continued her fight for women’s right as well as equal rights for education. She is the youngest person to have received the Nobel prize at the tender age of 17. On her 16th birthday in 2013, 12th July she delivered a fearless inspirational speech at the UN.

“One child, one teacher, one pen and one book can change the world. Education is the only solution.”

“They think that God is a tiny, little conservative being who would point guns at people’s heads just for going to school. These terrorists are misusing the name of Islam for their own personal benefit. Pakistan is a peace loving, democratic country. Pashtuns want education for their daughters and sons. Islam is a religion of peace, humanity, and brotherhood. It is the duty and responsibility of all to get an education for each child, that is what it says.”

And the Best quote was:

“As long as discrimination and inequities remain so commonplace everywhere in the world, as long as girls and women are valued less, fed less, fed last, overworked, underpaid, not schooled, subjected to violence in and outside their homes — the potential of the human family to create a peaceful, prosperous world will not be realized.”

Ellen Page’s inspirational as well as powerful speech for LGBT equal rights at the Human Rights Campaign “Time to Thrive campaign”, was also a coming out announcement about her own sexuality.

The best part of her speech is as follows:

“I feel a personal obligation and a social responsibility. I also do it selfishly, because I’m tired of hiding. And I’m tired of lying by omission. I suffered for years because I was scared to be out. My spirit suffered, my mental health suffered, and my relationships suffered. And I’m standing here today, with all of you, on the other side of that pain.”

4. Mindy Kaling on Growing up

At Harvard Law School Class Day ceremony, when she got up on the stage, her speech was not only the reflection of her courage, it was also priceless too.

“Who should be giving advice and the answer is people like you. You are better educated and you are going to go out into the world and people are going to listen to what you say, whether you are good or evil, and that probably scares you because some of you look really young.”

Oscar-winning actress Lupita Nyong’o’s speech at Essence Magazine’s Black Women in Hollywood was on color issues. She said, “My complexion had always been an obstacle to overcome.” This confession made it very clear that having dark skin means more struggle, also expressed her desire of having lighter skin when she was a teenager. She also mentioned her mother’s valuable words, that ‘beauty comes from inside, it’s not an external thing.’ She is the inspiration for women worldwide, who are struggling to make themselves realize that they are beautiful too.

And the best part was:

“I want to take this opportunity to talk about beauty. Black beauty. Dark beauty. I received a letter from a girl and I’d like to share just a small part of it with you: “Dear Lupita,” it reads, “I think you’re really lucky to be this Black but yet this successful in Hollywood overnight. I was just about to buy Dencia’s Whitenicious cream to lighten my skin when you appeared on the world map and saved me.”

Though there are controversies around her, however, she showed the courage to take opposition leader Tony Abbott, in Australia to task over his sexist remarks and attitude in the Australian parliament. Her speech was fearless, refreshing, rare and a stormy attack on sexism in politics. However, it was a very unusually seen from people in the legislature. Nevertheless, holding only twenty-two percent of parliamentary seats, she showed the courage and conviction to fight it out for other women too.

“Good sense, common sense, proper process is what should rule this Parliament. That’s what I believe is the path forward for this Parliament, not the kind of double standards and political game-playing imposed by the Leader of the Opposition now looking at his watch because apparently a woman’s spoken too long.”

This social psychologist had revealed the influence of body language and the way it innovates our social interactions and provided the audience with almost 2 minutes life tricks, which can alter the way women watch themselves. She also discussed the perfect timing for using smiley faces in our emails.

And the best quote was:

“We make sweeping judgments and inferences from body language, and those judgments can predict really meaningful life outcomes, like who we hire or promote, who we ask out on a date. When you pretend to be powerful, you are more likely to actually feel powerful. When you do the opposite, when you act like a scared animal by slouching and collapsing inward, you perform worse.”

8. Chimamanda Ngozi Adichie, fearless speech on “We Should All Be Feminists”