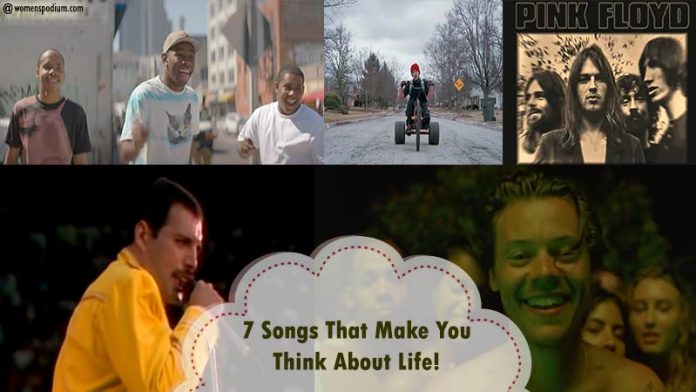 The arts have always been a source of expression for man, even during our early days. Whether it was the prehistoric cave paintings, ballads composed during the renaissance, or even the more recent music revolution, it did not matter. Art, in any way, shape or form, is catharsis for human beings. We revel in these paintings, films and meaningful songs that transform our monochromatic world into bright technicolor. Cheesy, I know, but that doesn’t mean that it isn’t true. Songs hold the power to transport you to different worlds, to help you voice what you genuinely feel, and more than anything, some songs that make you think about life

Meaningful Songs that Make you Think About Life

So when you’re feeling low, or maybe you just need to unwind, here are seven songs that make you think about life.

1. Wish You Were Here by Pink Floyd

One of the most well known psychedelic rock bands of the 90s, Pink Floyd continues to remain iconic even now. One of their most popular albums contained the song “Wish You Were Here”. The song was originally written as a memoir of Syd Barrett, the co-founder and lead singer. He had to leave the band because of his growing dependence on drugs and his deteriorating health.

The song talks about loss, grief, and the feeling of missing someone even when they’re already here. This is definitely one of the best songs that make you think about life, heartbreak and the feeling of losing a friend who you never thought you would.

Also read: Dealing with a depressed friend is an arduous task. Yet you should try every means to get him to feel better.

“How I wish, how I wish you were here
We’re just two lost souls
Swimming in a fish bowl
Year after year”

The music industry has quickly become a glorified mess in the media. It is becoming less about the music and more about the money. Lorde released a song back in 2013 called Royals. She spoke about how money is now becoming a larger priority than your artistic vision. We can easily relate this song to our lives too. How many times do we find ourselves doing something just for the sake of the money we get out of it? Royals are meaningful songs with catchy tunes that make you think about life on a deeper level.

“My friends and I?
We’ve cracked the code
We count our dollars on the train to the party
And everyone who knows us knows,
That we’re fine with this
We didn’t come for the money”

3. Lights Up by Harry Styles

Highly stylized and extremely gender fluid, Harry Styles’ music is sensual, experimental and sometimes downright on the brink of insanity. Fine Lines, his second album, features him as he boldly explores the fine line that separates what’s considered “masculine” and “feminine”. Lights Up talks about self-identity and media image. When you think about it, the phenomenon of having a curated media image is not just restricted to celebrities anymore. We all do it with filters and masks that make our profiles very different from who we actually are. We have begun to represent our profiles instead of the other way round. The song directly poses the question — Do you know who you are?

4. Take Me To Church by Hozier

Hozier is a master songwriter when it comes to songs that make you think about life. Most of his songs trigger deep emotional reactions, because he isn’t afraid to say it (or in this case, sing it) like it really is. Take Me To Church is one of his most popular ones, and for good measure too. The song talks about religion, power complexes and the general culture of shame. He poses an important question: Why are we encouraged to talk about our sins, when we will only be shamed for it later? The whole point of confessing is to ask for forgiveness. His song is looked at in a completely different way, if you watch the music video, but the lyrics themselves make this one of the best songs that make you think about life, the fallacies of religion and the toxicity of human nature.

“Take me to church
I’ll worship like a dog at the shrine of your lies
I’ll tell you my sins and you can sharpen your knife
Offer me that deathless death
Good God, let me give you my life
Take me to church.”

5. Stressed Out by Twenty One Pilots

Stressed Out by Twenty One Pilots is a clever song concealed behind EDM and loud bass. It talks about a childhood that has gone by way too fast and how our adulthood has slowly washed away all those dreams you held as a child. The entire song pulls you down a memory lane you’ve been too preoccupied to visit. Adult life doesn’t have to mean the loss of childhood innocence. Sure, we get busier, we have more things to think about, but it does not mean we can’t step back from time to time and just breathe in the simplicity of it all. You can’t turn back to the past with simple days, but what you can do is to make your present more simple. That’s all there is to it.

Also read: A better cure for a better tomorrow is for you to be happy and leave your past behind.

“Wish we could turn back time
To the good old days
When our momma sang us to sleep
But now we’re stressed out.”

This song is a go-to when you feel down or low about life. The lyrics are light, and so is the beat. It’s the kind of song that would cheer you up and make you forget about your worries, even if it was just for those 4 minutes. Williams talks about how the tough times may seem overwhelming, but you will get through it. The key is to try and stay happy even when you don’t exactly feel on top of the world. Sometimes you just need a living room dance party, singing meaningful songs to cheer you up.

7. Under Pressure by Queen and David Bowie

Under Pressure is one of those songs that make you think about life in the most relatable way possible. Although the lyrics aren’t exactly the most positive, the song still makes you think about life and the common pressures we face on a day to day life. It has that trademark Queen background track that makes it seem like the song is another peepy number, but it’s not. The lyrics are way too real and literally talk about how pressure threatens to drown you. The song’s pessimism is comforting in a way. It makes you realise that you’re not alone, even if you feel that way.

“Pressure pressing down on me
Pressing down on you, no man ask for
Under pressure that burns a building down
Splits a family in two
Puts people on streets
It’s the terror of knowing what this world is about
Watching some good friends screaming
Let me out!”

Don’t forget to give these a listen the next time you are in a philosophical mood. Until then, happy listening! And if you think we’ve missed any, comment down below to tell us.