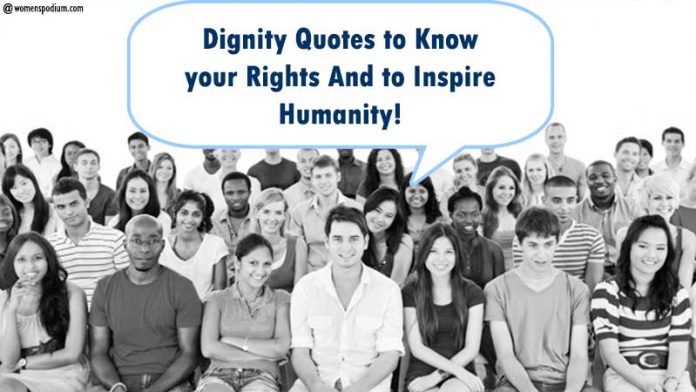 Dignity upholds human survival with respect when treasured as unanimous. Our 25 dignity quotes will give you insights into human dignity and human rights. And in this race to gain respect, to procure human dignity is the fundamental right of every person. Being as one species, we all want respect and acknowledgment. Everyone has their own worth, and no one has any right to disrespect others. So, it means if you want to be honored, you have to honor others, a clear sight of giving and take.

What is Dignity to You?

What are your views on dignity? What’s its status in your life? Do you associate with others based on one’s dignity or human dignity? Dignity is quite a debatable notion; highly controversial yet most commonly used terms related to social life status. Many different definitions have been proposed during numerous ethical and political debates, but none has reached any agreement. The word dignity denotes the respect owed to a person or signifies the inherent value of the human race altogether. In England, dignity represents respect for individual liberty, whereas, in France, dignity usually symbolizes honor for humanity as a whole.

Also Read: Children see gender inequality in their homes and communities every day, we must work on how to curb gender-inequality?

What is Human Dignity and Why it is Important?

The basic concept of human dignity is the belief that everyone holds an exceptional value tied to their humanity. One can’t be biased based on religion, race, gender, or anything; it’s just one thing – ‘you are a human being’. Human dignity justifies human rights, and that’s it is crucial. When people live in a diverse culture or are divided in multiple ways based on class, gender, race, religion, then discrimination begins. Privileged people enjoy the perks, and weaker ones are either abandoned or oppressed further, leading to another chaos inevitably leading to violence and revolutions. Acknowledging human dignity and the generalization of human rights is a must so that individuals can be protected and respected; it’s just for the good of the whole world.

Let’s check out some of the best dignity quotes to read from influential personalities to inspire you. We hope these quotes about dignity back you to attain more knowledge and understanding on humanity, self-respect, and respecting others.

The most courageous act is still to think for yourself. Aloud.

When it comes to human dignity, we cannot make compromises.

When there is oppression and dictatorship, by not speaking out, we lose our dignity.

We all need to treat each other with human dignity and respect.

All human beings are born free and equal in dignity and rights.

Dignity is not negotiable. Dignity is the honor of the family.

Every life deserves a certain amount of dignity, no matter how poor or damaged the shell that carries it.

The ideal man bears the accidents of life with dignity and grace, making the best of circumstances.

Dignity does not consist in possessing honors, but in deserving them.

Every individual has the right to live a dignified life fulfilling their potential. Dignity is significant to the human spirit, and it means being recognized, admired, and respected for what they are, what they believe in, and how they live their life. Treating other people with respect means treating them the way we would like to be treated.

The most luxurious possession, the richest treasure anybody has, is his personal dignity.

When we achieve human rights and human dignity for all people – they will build a peaceful, sustainable, and just world.

Dignity does not consist in possessing honors, but in deserving them.

Our dignity is not in what we do, but what we understand.

It is not the quantity but the quality of knowledge which determines the mind’s dignity.

And each of us can practice rights ourselves, treating each other without discrimination, respecting each other’s dignity and rights.

Dignity will only happen when you realize that having someone in your life doesn’t validate your worth.

Dignity does not come from avenging insults, especially from violence that can never be justified. It comes from taking responsibility and advancing our common humanity.

All souls are beautiful and precious, deserving of dignity and respect, and worthy of peace, joy and love.

The quest for freedom, dignity, and the rights of man will never end.

Honor yourself by acting with dignity and composure.

Be strong. Live honorably and with dignity. When you don’t think you can, hold on.

Respect Everyone to Honor Humanity

Dignity reflects our compassion and humanity. When we treat everyone as equal, we give ourselves the right to equality where we all are equally worthy of basic respect and rights. Do share your views on dignity via our comment box. Hope above-shared dignity quotes inspire you to respect everyone around you despite their religion, social status, gender or race.

Also Read: Respect everyone and their rights to create equal opportunities and to thrive humanity in peace.