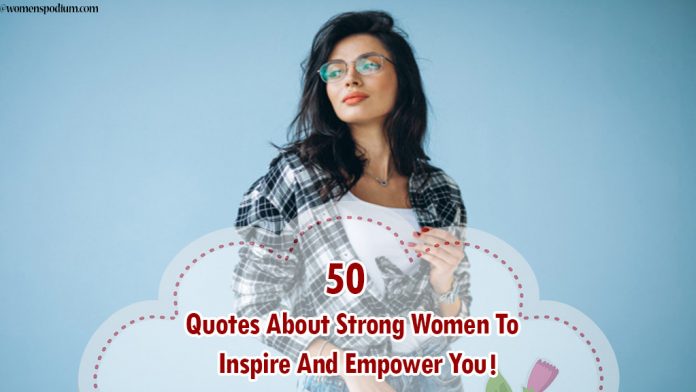 We often read numerous articles, powerful speeches, and inspiring quotes about strong women. Sometimes, there are positive discussions, and sometimes negative threads and trolls overwhelm sensitive topics like women empowerment and feminism. Many times, it feels good to read, and sometimes it feels like still, the existence of women is jeopardized due to many known and unknown reasons. It is often said and heard that “this is a man’s world”. The irony is people forget the true existence of women; in fact, they overlook that women are as strong as men are. They are a person who is as resilient and courageous as the men think of themselves.

To embrace her sacrifices and to proclaim her efforts towards improving the community, every year, March 8 is celebrated as International Women’s Day. Today, in this article, we have picked out some of the best quotes about women. But before the quotes about strong women, let’s explore some of the qualities which they possess.

Powerful Quotes About Strong Women Along with Their Qualities

They are Courageous Species

When it comes to courage, women are the best-quoted example. Malala Yousafzai, Amelia Earhart, Rosa Parks, Audrey Hepburn, Anne Frank, and many more, are the few courageous women of the society. You can’t count them on your fingertips.

As Confident as the Men

Every woman is confident in her own way. Women know how to manage everything confidently, either it is the workplace or home. When we talk about confidence, one name we would love to take is Anna Eleanor Roosevelt, who became a new role model for the title First Lady. She worked hard and traveled confidently to promote human rights and due to her this passion and work; President Harry S. Truman called her the First Lady of the World.

They Know How to Deliberate Any Situation

Every decision she makes is a result after analyzing the whole situation. You can count on women if it comes to deliberating a decision. It feels wonderful when you see many strong women around you, and to many of us, they are a real inspiration!

A person can never achieve their goals without having a passion for it. When we talk about being passionate, that means how you would strive and struggle towards your goal. No one is more passionate than a woman, who works, earns for her family; she makes her home and takes care of her family.

Intelligence is her forte too. Some of the renowned names are Jane Austen – a writer, Maya Angelou – an influencer and poet, British Prime Minister – Margaret Thatcher; and many others are the leading examples proving the intelligence of women.

They Can Also Show Tenacity

Women have the character of holding on to a decision and never lose the grip over that. “Ruth Katherina Martha Pfau” is a perfect example of this, as she left Germany and spent her whole life fighting “Leprosy” in Pakistan.

Women are Visionary and Persuasive

A visionary woman is smart, motivated, and community-minded. She works for the betterment of other’s life. Jane Jacobs, Rachel Carson, Jane Goodall, and Alice Waters are some of the most persuasive women.

A strong woman is a woman determined to do something others are determined not be done.

Clever and attractive women do not want to vote; they are willing to let men govern as long as they govern men.

Strong women don’t play the victim. Don’t make themselves look pitiful and don’t point fingers. They stand and they deal.

I feel there is something unexplored about woman that only a woman can explore.

I’m tough, ambitious and I know exactly what I want. If that makes me a bitch, Okay.

If men knew all that women think, they would be twenty times more audacious.

A really strong woman accepts the war she went through and is ennobled by her scars.

You don’t have to play masculine to be a strong woman.

Women have simple tastes. They get pleasure out of the conversation of children in arms and men in love.

One of the most courageous things you can do is identify yourself, know who you are, what you believe in and where you want to go.

Women are like teabags. We don’t know our true strength until we are in hot water.

For women’s tears are but the sweat of eyes.

Women are never stronger than when they arm themselves with their weaknesses.

Women will never be as successful as men because they have no wives to advise them.

When men reach their sixties and retire, they go to pieces. Women go right on cooking.

A woman is the full circle. Within her is the power to create, nurture and transform.

Women love always: when earth slips from them, they take refuge in heaven.

A woman with a voice is by definition a strong woman. But the search to find that voice can be remarkably difficult.

I believe women still face a glass ceiling that must be shattered.

Women need not always keep their mouths shut and their wombs open.

Women get more unhappy the more they try to liberate themselves.

Internet is flooded with quotes on empowering women and truly now’s the time of women empowerment. In the 21st century, women aren’t where they used to be. Women have grown out of their socially imposed cages and unfurled their wings into all sectors of society. Be it economics, business, aviation, filmmaking, or even just enjoying the little freedoms of life.

It’s been a long and hard struggle trying to secure a place of worth in a male-dominated society. It started from the demand of equal voting rights and a right to assert their creative freedoms, and as the years went by, we’ve grown more of a foothold than ever.

But we’ve all done our bit and must continue to do so, to help all women rise to equal power and status. And yet, the road to perfect equality is a long one and definitely arduous to undertake, what with its other obstacles like, inclusion and acceptance of different castes, religions, sexualities, race, and class. These are no easy feats, and it requires a lot of determination and spirit to work towards this dream-like horizon.

And so, here are some of the most influential quotes on women empowerment and quotes about strong women that can help add fire to this burning flame of enthusiasm. Let’s all unite and keep this fight alive until we’ve won it. Go, women!

Women with money and women in power are two uncomfortable ideas in our society.

Nature makes woman to be won and men to win.

Women’s value has been under-recognized for far too long.

Women don’t realize how powerful they are.

And I think women have come a very, very long way, but they have a long way to go.

Women are the sustaining force of any society – they think of the children and the next generation’s chances.

Men and women must be educated, in a great degree, by the opinions and manners of the society they live in.

All women become like their mothers. That is their tragedy. No man does. That’s his.

I guess at the end of the day, all women like to be appreciated and treated with respect and kindness.

The test of civilization is its estimate of women.

The world needs strong women. Women who will lift and build others, who will love and be loved, women who live bravely, both tender and fierce, women of indomitable will.

Sometimes, women in families put themselves last until it manifests itself in their own health.

I have thought a sufficient measure of civilization is the influence of good women.

There is no limit to what we as women can accomplish.

Feminism isn’t about making women stronger. Women are already strong, it’s about changing the way the world perceives that strength.

Think like a queen. A queen is not afraid to fail. Failure is another steppingstone to greatness.

Above all, be the heroine of your life, not the victim.

You have to have confidence in your ability, and then be tough enough to follow through.

The most courageous act is still to think for yourself. Aloud.

Be strong enough to stand alone, smart enough to know when you need help, and brave enough to ask for it.

It took me quite a long time to develop a voice, and now that I have it, I am not going to be silent.

I raise up my voice—not so that I can shout, but so that those without a voice can be heard. … We cannot all succeed when half of us are held back.

Although our world has changed and quite receptive to empowering women, fighting gender issues, and genuinely understanding feminism; still it is half won battle for women. Women have to be strong and supportive towards each other. Being women, it’s our job to understand our right and to stand for ourselves; the above quotes about strong women can be your torchbearer to enlighten the power you hold within you.