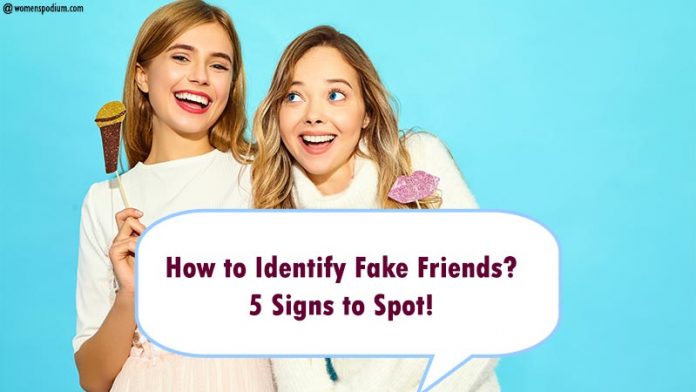 Since the very beginning of time, man has required a companion. However, finding the right friend to help you shoulder the world is essential. In the modern-day world, finding a true friend becomes even more difficult. The first step to build a strong friend group is to spot all the fake friends that surround you. This article lists out all the not-so-obvious signs to spot a fake friend.

Fake friends: once they stop talking to you, they start talking about you.

I once had a friend who refused to let me talk to people who she had beef with. I knew right then, that as much fun we have together, it was time to let her go. A controlling friend is like a smoking addiction. You start off with one cigarette, and the next thing you know, you need an entire packet to satiate you. Right now, they may have “strong opinions” over something as silly as your daily routine. But, you can never be too sure as to where it may lead you.

However, it is important to recognize the difference between control and concern. You cannot think of your friend as “controlling” if they’re merely trying to better your life. For example, if they think you should stop drinking so much, they’re just saying it for the reason that they know it’s wrong. So, don’t mistake a well-wisher for a fake friend just because they keep nagging you about the certain bad habit.

If your “so-called” friend treats you differently when you’re with a different friend group or in a different social setting, then they’re obviously not a real friend. A real friend will not be afraid to admit that they get along with you. They don’t require you to be anyone other than yourself.

However, here are the signs to spot a fake friend: They’re perfectly lovely to you when it’s just the two of you, but when new or “better” people enter into the equation, the entire situation changes. They may make fun of your insecurities, and try to play on your weak spots just to make themselves seem superior in front of a third party. Instantly distance yourself from such people. They won’t add any value to your life, and most definitely turn out to be fake friends.

Also Read: You enjoy the female friendship more when you know that your friends are always true to you in every circumstance.

Some friends hate it when your opinions differ from theirs. They get overly aggressive and go to any extent just to prove their point. If you end up in frequent long term disagreements with your “friend”, then chances are your friendship is toxic. Your friend doesn’t believe in the phrase “agree to disagree”. They aren’t looking for a friend, but a mere puppet, who will agree to all they say and do.

A major sign that can expose such a friend is if they always expect you to apologize first, after an argument. One of my closest friends turned out to be this way. This dictatorship can be a subtle aspect of their personality, so you need to look really deep to identify it. It took me two years to figure out why I didn’t feel so happy with my best friend. The key is to find out the root cause of all your nasty fights and find the common point linking them all.

Also Read: The important asset of every relationship is to respect each other, whether it is friendship, a casual relationship, or even a business relationship.

Everything about friendship is two-way. In fact all of the relationships in this world work on the simple principle of give and take. If you think your friend doesn’t give you much of a chance to vent out your emotions but keep going on and on about their problems and their troubles, then, simply put, you aren’t their friend. They are using you as their private emotional punching bag. These friends aren’t interested in your life at all. They just want someone to dump their entire emotional baggage onto.

A sure shot sign of this is when you see that your “friend” doesn’t exactly listen when you talk. They keep looking at their phones or merely seem disinterested. They try to find a gap in the conversation so that they can snatch back the reins again.

Of course, an important aspect to consider is timing. If you are aware that they are going through a particularly rough time, it is irrational of you to think of them as emotional. It is granted that they will look for support from a friend, and you should feel honored that they trust you enough to tell you.

Everyone has that one friend who becomes super cranky every time something remotely good happens to you. Friends should be the ones to support you and push you to do your very best. However, people like this dissuade even their very best friends just because they want to appear superior. They bring you down by harshly criticizing even your best work, to the point where you start questioning your own talents. This is one of the most obvious signs to spot a fake friend.

The first step is to spot such type of friends. After you know who it is, gently remind yourself to stop considering their opinion of any worth. You will be happier if you learn to ignore the hate. It’s your choice to continue keeping them in your life or discard them completely, but once their view stops mattering to you, your confidence will rise automatically.

The best way to weed out such friends is to ask your family or siblings. While you might think that they won’t know your friends much, they are actually much more perceptive of fake friends than you are. If that seems unlikely, this article will most definitely serve your needs. One can’t go without friends, but no friends are certainly a lot better than fake friends just using you to meet their ends. Like someone great once said, “Books are the quietest and most constant of friends; they are the most accessible and wisest of counselors, and the most patient of teachers.”

Also Read: Despite two people have different mindsets, they can still maintain a healthy friendship and overcome their differences

What’re Your Favorite Veggies? List of Most Popular Vegetables Worldwide!

Souti - January 21, 2022 0
A vegetable is a wide phrase that indicates the safe to eat parts of plants. It could be their roots, seeds, fruits, or even...

How to Stay Focused During Online Classes? Some Tips for Students!

10 Things You Can Develop to Improve Your Personality

Gender Equality Today for a Sustainable Tomorrow: Theme for 2022 International...