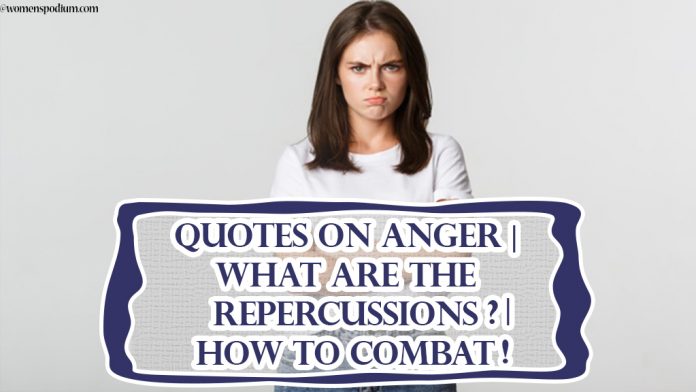 Anger is pretty much universal, and everyone feels it. But it comes in many forms. Either it is the frustration after an encounter with a rude customer at work or unpleasant bad arguments with a fool, people get irritated quite a lot. This makes them suffer even more. Following quotes on anger will depict the impacts of anger. One has to know how to cage this rage and the effects it imposes on his physical and mental health.

Uncontrolled Anger Will Drag You Down

Rage, anger, and frustrations lead to uninvited fights, arguments, physical abuse, and self-harm. Getting angry is never an issue, it is only fatal when you or other people are being harmed physically or mentally. An uncontrollable level of anger keeps you from thinking straight and takes up much of your energy. Your focus and concentration are lost, and your blood pressure is always on the rise. In turn, your tasks take the shape of highland and never come to an end.

Anger Is Controllable for Anyone

When we get furious, we must take a time-out and think before sputtering any nonsense. We must control the urge to speak in the heat of the moment. And to master this control, we can try practicing to be good listeners. This will keep us in control. Moreover, when your rage seems to get out of your hands, try taking a deep breath and find ways to talk things out once you are calm. Controlling your anger isn’t very hard indeed.

There are a lot of well-known and promising quotes on anger that you can search online. Here are some quotes to describe the impacts of anger and how much it takes for you to control it.

For every minute you remain angry, you give up sixty seconds of peace of mind.

Anger is a wind which blows out the lamp of the mind.

Keep your temper. A decision made in anger is never sound.

Anger is an acid that can do more harm to the vessel in which it is stored than to anything on which it is poured.

A broken bone can heal, but the wound a word opens can fester forever.

People won’t have time for you if you are always angry or complaining.

Speak when you are angry – and you’ll make the best speech you’ll ever regret.

Holding on to anger is like grasping a hot coal with the intent of throwing it at someone else; you are the one who gets burned.

Getting angry doesn’t solve anything.

Whatever is begun in anger ends in shame.

To be angry is to revenge the faults of others on ourselves.

Never do anything when you are in a temper, for you will do everything wrong.

After reading the above quotes you must have realized that anger can lead to destruction only plus you are losing your mental peace. It is true in anger, the mind fails to work in the right way but still, you have to learn to fight and thrive. To combat an angry mind isn’t easy but you must not forget through or urge of doing things right and with the help of your willpower you can combat your anger. Here are some quotes on grasping your anger.

In times of great stress or adversity, it’s always best to keep busy, to plow your anger and your energy into something positive.

A broken bone can heal, but the wound a word opens can fester forever.

Silence is one of the hardest arguments to refute.

When angry count to ten before you speak. If very angry, count to one hundred.

The opposite of anger is not calmness, its empathy.

The greatest remedy for anger is delay.

When anger rises, think of the consequences.

When you are offended at any man’s fault, turn to yourself and study your own failings. Then you will forget your anger.