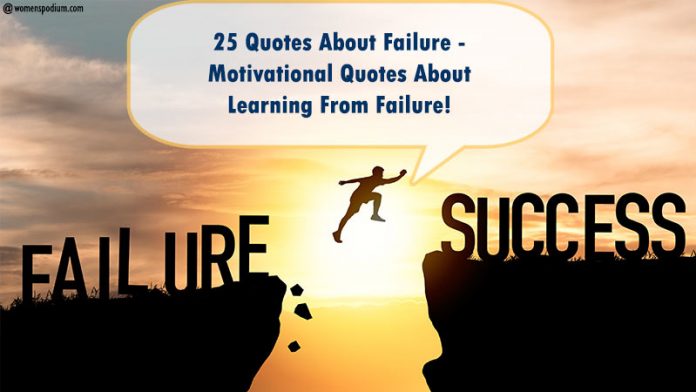 Failure and its effects on the human spirit have been long discussed. Dealing with failure is an inevitable experience for everyone, be it a small child trying to walk for the first time or a great scientist trying to invent something new. Failure can be debilitating; however, it can pave the path right towards our success if dealt with in the right way. Before digging more about failure or quotes about failure, let’s start with these beautiful lines:

Success is failure turned inside out,
The silver tint of clouds of doubt,
And you never can tell how close you are,
It may be near when it seems afar,
So stick to the fight when you’re hardest hit,
It’s when things seem worst that you mustn’t quit.

Why Talk About Failure?

Too often in our society, we see the fear of failure stopping people from even beginning their journey. Failure is almost always seen in a negative light, and it indeed can be a demoralizing experience. However, all too often, we emphasize only on achieving success, and we tend to forget that failure is also an essential ingredient in the success recipe for anyone. Either that, or we tend to romanticize failure, making it seem like an almost desirable experience. In reality, it does not work in any of these ways.

How to Deal with Failure?

Psychologically speaking, the first step to dealing with failure is understanding and acknowledging its impact. Failure can leave a residue of fear, anxiety, and helplessness, making your goal seem less attainable. Failure tends to distort your self-image, and it does set you back for some time. Denying these effects of failure causes us to bottle up our emotions which are then expressed in destructive ways. What we want to do then is to acknowledge these effects, seek help if we need it, and then focus on rectifying our mistakes and improving ourselves. The key here is to focus on factors that are in your control. Here are some quotes about failure to motivate you to start your journey of healing from failure.

You always pass failure on your way to success.

Failure isn’t fatal, but failure to change might be.

Success is most often achieved by those who don’t know that failure is inevitable.

The phoenix must burn to emerge.

Giving up is the only sure way to fail.

It’s fine to celebrate success, but it is more important to heed the lessons of failure.

Failure is a detour; not a dead-end street.

It is impossible to live without failing at something, unless you live so cautiously that you might as well not have lived at all – in which case, you fail by default.

Failure is good as long as it doesn’t become a habit.

If you are afraid of failure, you don’t deserve to be successful.

Courage allows the successful woman to fail and learn powerful lessons from the failure. So that in the end, she didn’t fail at all.

Failures are finger posts on the road to achievement.

Sometimes, it might be the bad luck that you are constantly losing even you are doing your best but again, giving up isn’t the choice. Those who are strong, fight for themselves, never lose hope and struggle to do their best to attain success. Hard work never goes paid off, it may take time, but it will give you the result.

Powerful Quotes On Failure That Will Lead You To Success

If you don’t try at anything, you can’t fail… it takes back bone to lead the life you want

Failure should be our teacher, not our undertaker. Failure is delay, not defeat. It is a temporary detour, not a dead end. Failure is something we can avoid only by saying nothing, doing nothing, and being nothing.

It’s failure that gives you the proper perspective on success.

There is no failure except in no longer trying.

Think like a queen. A queen is not afraid to fail. Failure is another stepping stone to greatness.

Don’t fear failure—not failure, but low aim, is the crime. In great attempts it is glorious even to fail.

The only thing that separates success from failure is one last attempt. Try one more time and you will get lucky.

Success is not final, failure is not fatal: it is the courage to continue that counts.

Winners are not afraid of losing. But losers are. Failure is part of the process of success. People who avoid failure also avoid success.

Failure is the key to success; each mistake teaches us something.

Those were some quotes about failure and dealing with it. However, it is essential to remember that everyone’s journey looks different. Make sure to draw inspiration from other people, and yet, focus and celebrate the uniqueness of your journey. Wishing you success in dealing with failure. 😊

Also Read: Everyone needs positivity, inspiration, peace, and encouragement in their life to pull through the hard times.