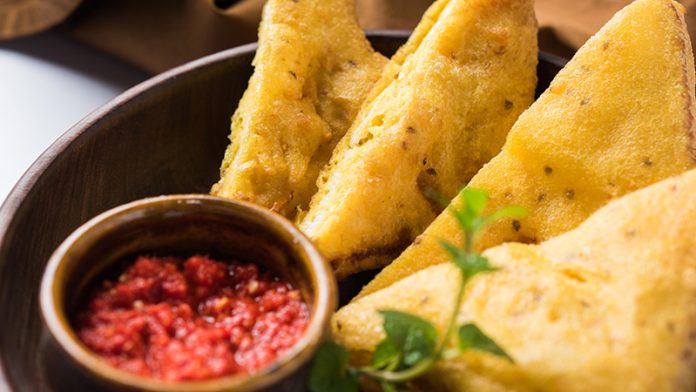 Trying new cooking experiments sometimes turns out to be the best recipe you have ever tried. One day with these hit and trial methods ended me making potato-cheese stuffed bread pakoras. Who doesn’t love bread pakoras; it is a quick, easy and tasty recipe that almost every Indian household makes.

How To Make Yummy Bread Pakoras?

If you are tired of the same old traditional way of making bread pakoras, try this slightly enhanced version of bread pakoras. This tea-time snack: potato-cheese stuffed sandwich, is my family’s favourite tea-time snack, which I often make. Usually, bread pakoras are stuffed with a filling of boiled, mashed potatoes, but by adding cottage cheese and processed cheese, you can simply come out with a new recipe. Check out the recipe for this crisp bite; it has a different taste, my family and I enjoy this a lot, and you too can try it at least once for a change.

That’s it, and your stuffed potato-cheese bread pakoras are ready to eat. Sprinkle chat masala over it and enjoy with tomato ketchup or coriander green chutney.

Also Read:  if you are a cheese lover yourself or you have people at home who love cheese, then here is the recipe of cheese stuffed potato balls.