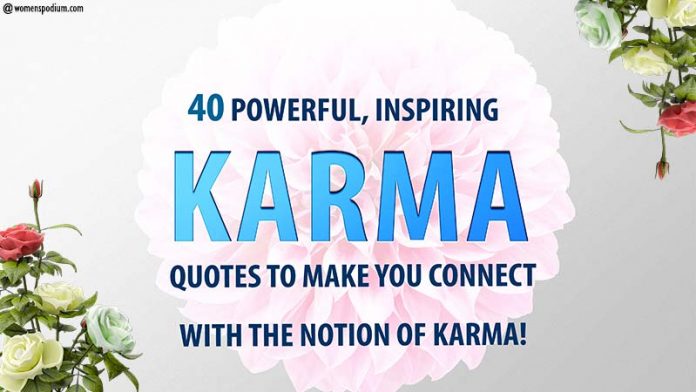 To many, Karma might be just a philosophy or notion, but for many, it is an inevitable truth linked to their deeds. When it comes to good deeds or misdeeds, those who believe in Karma often keep themselves in check. Life is indeed yours, but doing all you want without thinking a bit, whether you are doing right or wrong, is not justified. Being human, one is free to make his own decisions but is certainly not free from the consequences of his action. Karma doesn’t bound you; it liberates your soul and mind. Today in our quote column, we will address karma quotes; in believe that these quotes about karma guides you towards the right path of virtuousness.

Although one can’t prove or define Karma technically, but wise people believe in the proverb, ‘As you sow, shall you reap’. The concept of Karma is thousands of years old; it’s a philosophy, a theory and one of the fundamental teachings in Buddhism. The principle of Karma breathed in India before Buddhism existed, later was spread worldwide by Buddhists.

How do you Define Karma?

Karma is unavoidable, inevitable, and based on our deeds; it doesn’t come unexpectedly. You can simply put it as ‘whatever we do during our lifetime in this world; all comes back to us, whether it’s good or bad.’ Have you ever let the concept of karma guide your actions? Our life is a reflection of what we plant. If you constantly use, abuse, and harm people, life will use, abuse, and harm you in its own way. It will be you, who has to identify and pinpoint why you are punished? Whenever you are in a bad shape, do think, brainstorm, and evaluate your decisions and actions, you will undoubtedly find your mistakes if you are true to yourself. Pointing out fingers on others is easy, but remember, when you point the finger at others, your three fingers point towards you too, and Karma notices it.

Also Read: Try to spread harmony and happiness around you to build your Karma strong; live in peace and spread positivity.

Have you ever thought deeply, what really Karma is and how it influences our fate and shapes our destiny? How you can see the repercussion of your actions in a favorable light. It’s plainly simple, let the light of humanity ignites you all the time; keep conviction intact while distinguishing between right and wrong. Still, if you don’t believe in the power of Karma, maybe you will change your mind after reading these quotes.

How people treat you is their karma; how you react is yours.

Like gravity, karma is so basic we often don’t even notice it.

You cannot do harm to someone because someone has done harm to you. You will pay just like they will.

If you give a good thing to the world, then over time your karma will be good, and you’ll receive good.

As long as karma exists, the world changes. There will always be karma to be taken care of.

You have to be very careful when involving yourself with someone else’s karma. It can quickly become your karma too.

Dangerous consequences will follow when politicians and rulers forget moral principles. Whether we believe in God or karma, ethics is the foundation of every religion.

I try to live with the idea that karma is a very real thing. So I put out what I want to get back.

There’s a natural law of karma that vindictive people, who go out of their way to hurt others, will end up broke and alone.

Men are not punished for their sins, but by them.

Karma, simply put, is an action for an action, good or bad.

Do you Ever Regret Bad Karma?

Being human, we can’t be perfect all the time. However, all human beings inherit seven sins: pride, greed, wrath, envy, lust, gluttony and sloth, contrary to the seven heavenly virtues: faith, hope, charity, fortitude, justice, temperance, and prudence. The percentage of our sins and virtues can vary from human to human. But our real job is to fight back the wrongdoings, sins and follow the right path of virtue. To realize our mistakes and to regret is good Karma. When you regret and repent your bad deeds, it is considered a good act, which may further help you weigh evenly between good and evil.

What is the karma saying? Read these quotes:

According to the karma of past actions, one’s destiny unfolds, even though everyone wants to be so lucky.

There are the waves and there is the wind, seen and unseen forces. Everyone has these same elements in their lives, the seen and unseen, karma and free will.

Karma is not just about the troubles, but also about surmounting them.

Sooner or later, everyone sits down to a banquet of consequences.

Every action of our lives touches on some chord that will vibrate in eternity.

Like gravity, karma is so basic we often don’t even notice it.

Karma is a balance sheet of life which debits and credit all your deeds. Which is audited by our creator and actions are based on what we accumulated in it.

Don’t judge each day by the harvest you reap but by the seeds that you plant.

The universe does not carry debts, it always returns back to you what you gave it.

It is a rule of life that we eventually become victims of the evil we do to others.

We must always reflect only what we wish to see reflected within us.

Show a little faith in someone when they need it. It’s amazing how it comes back around to you.

If karma doesn’t catch up, God will surely pick up the slack.

Everyone Reaps the Labor of their Deeds

Every one of us experiences Karma in our own way. Everyone reaps the labor of their deeds, either good or bad. Those who have strict faith in Karma believes that if a person does evil deeds, it will wreak havoc in their life at any point in time. And if a person believes in humanity and good deed, it will benefit or prosper them. Freshen up your perspective and read the remaining karma quotes; who knows, any one of the quotes might change your life course?

Karma Quotes to Inspire Positivity in Your Life!

I want revenge, but I don’t want to screw up my karma.

What goes around comes around. And sometimes you get what’s coming around.

In the long run, every man will pay the penalty for his own misdeeds. The man who remembers this will be angry with no one, indignant with no one, revile no one, blame no one, offend no one, hate no one.

This is your karma. You do not understand now, but you will understand later.

Karma can be seen as a curse or a gift because it keeps us attached to this world.

Karma is a cruel mistress.

Individuals create themselves through their moral choices.

The man who does ill must suffer ill.

I don’t have any reason to hate anybody; I believe in good karma and spreading good energy.

Live a good and honorable life. Then, when you are older you can look back and enjoy it a second time.

You cannot control the results, only your actions.

The Law of Karma is also called the Law of Cause and Effect, Action and Reaction and: as you sow, so shall you reap.

Even if you are a nonbeliever, you might review your views on the truth behind Karma after reading these provocative, stimulating and intriguing quotes on Karma. Everyone must hold the value of respect and compassion towards others. The above karma quotes may make you ponder about how what goes around will come back.

Also Read: The rule of Karma operates like this: You get what you give. So if you’ve broken someone’s heart without any valid reasons, you get your own heartbroken; read these quotes to mend yourself if you feel broken.